Merry Christmas from all of us.

Dear Friends & Supporters, The Zimbabwe Pensioner Support Fund Christmas 2021 trip has come to an end and a HUGE Thank you for helping us make “A bit of Magic” for Christmas 2021 – With your support we managed to get all our Golden Oldies adopted. With the help of our local community in Malelane… 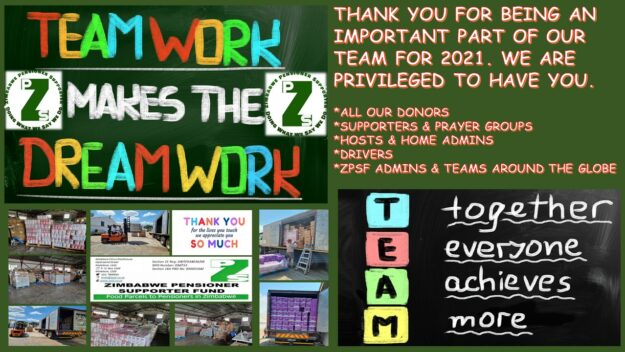 THE ZPSF THANKS YOU FOR BEING AN IMPORTANT PART OF OUR TEAM FOR 2021.

THANK YOU FOR BEING AN IMPORTANT PART OF OUR TEAM FOR 2021. WE ARE PRIVILEGED TO HAVE YOU. *ALL OUR DONORS *SUPPORTERS & PRAYER GROUPS *HOSTS & HOME ADMINS *DRIVERS *ZPSF ADMINS & TEAMS AROUND THE GLOBE Kind Regards  Linda Schultz Director – Fund Raising & Awareness for the Zimbabwe Pensioner Support Fund Phone 013… 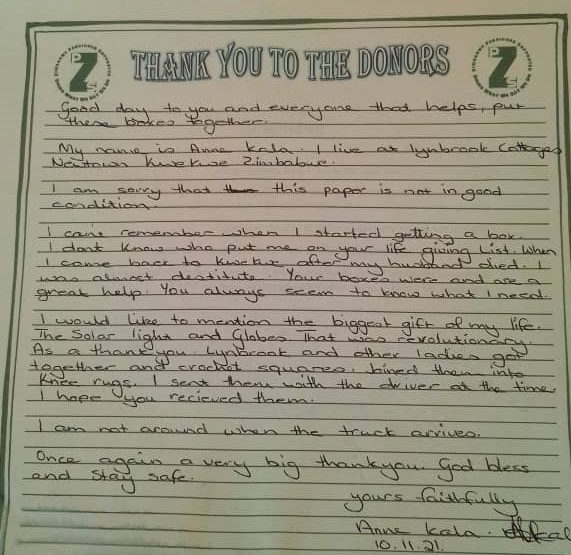 ZPSF – All our Golden Oldies adopted for Christmas 2021

One pensioner at Boggies Trust in Gweru described what we are doing as “ CHRISTANITY IN ACTION”. On the Christmas Trip “when we also hand out a small present to each of our pensioners, one pensioner had this to say. “ I have family all over the world but the only Christmas present I had to open on Christmas day was The one from the ZPSF “.

On Saturday I headed towards Beit Bridge and delivered the goodie boxes in Esogodini, I decided to spend the day in the area and meet some of the folks I haven’t seen. At Kinghaven MOTHS I delivered the boxes as usual and had a few minutes with the guys at the hall. Then on to Falcon Collage to meet up with Norma Heyman. She escorts me into the collage, and I drop the first box off at Mr. Tony Bankroft’s house. I was supposed to have tea with the Heymans, but was hijacked by Tony. We had a good chat and I went to drop off at Norma and Johan Heyman. Wow, what an honour to meet these two legends, probably known by half of the people ever schooled in Rhodesia and Zimbabwe, Johan and Norma had schooled children in Falcon and Masvingo most of their lives, and they are both in their eighties. I had tea and we talked about all sorts of things, from farming, school traditions and sewing machines… I was surprised by being introduced to their son, daughter in law and granddaughter. Then Norma wet through the box and basically halved the ingredients explaining that half was luxuries and then she surprised me and enquired if everything was for them as it was so much. I pulled myself away and as I was leaving, I was in awe and realized I just spent time with some of the more well-known teachers and what a blessing having met them. I will definitely be back for another visit.

I’ve never been closer to throwing in my benevolent towel as I have before this trip! I’d spent the days, or weeks leading up to it, watching the chaos at Beitbridge border post and was ready to mhanya in the opposite direction! But there you go……… I went, I did some fancy border hopping footwork…

Last chance to sponsor a Golden Oldie for Christmas 2021

WE ARE SO CLOSE!!!    502 Boxes for our Golden Oldies Adopted for far, Yippee, Still 218 to go. Then the Frail Care parcels and Kitchen Gifts. It’s that time of the year again and we at the ZPSF would like to be able to make the upcoming Christmas of 2021 extra special for our pensioners.… 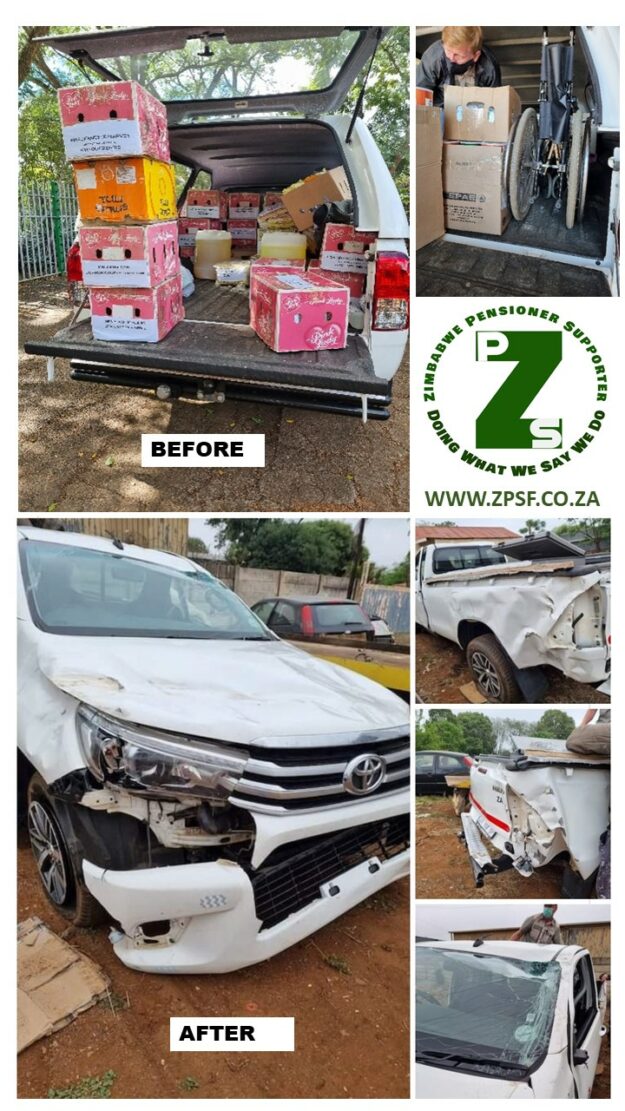 Our October trip was underway with Johan Schultz and Edith Botha leaving Malelane on Saturday the 2nd , however once again we encountered a “slight” hick up in the form of an accident just after Louis Trichardt in which our bakkie was a write-off. We are incredibly thankful to have both people from the bakkie alive and still with us after narrowly missing a head-on accident that happened right in front of them only to be hit from behind and sent flying over the guard rail into a ditch. Myself and our son Frans drove up to Louis Trichardt first thing Sunday morning to collect them and arrived back late last night. So we are once again experiencing “technical” delays and now to get our insurance claim in and replace the bakkie ASAP. Once the trip starts Johan will be doing the Bulawayo route while Daniel Koekemoer will be doing the round trip with the UD 90. This is to be our second to last trip for the year with our next one being the “Magic One”.

Dear Zimbabwe Pensioner Support Fund Supporters and Friends, We are currently going full tilt with the final preparations for our October trip which will be commencing within the next 10 days. It currently looks like Johan will be doing the Bulawayo route while Daniel Koekemoer will be doing the round trip with the UD 90.… 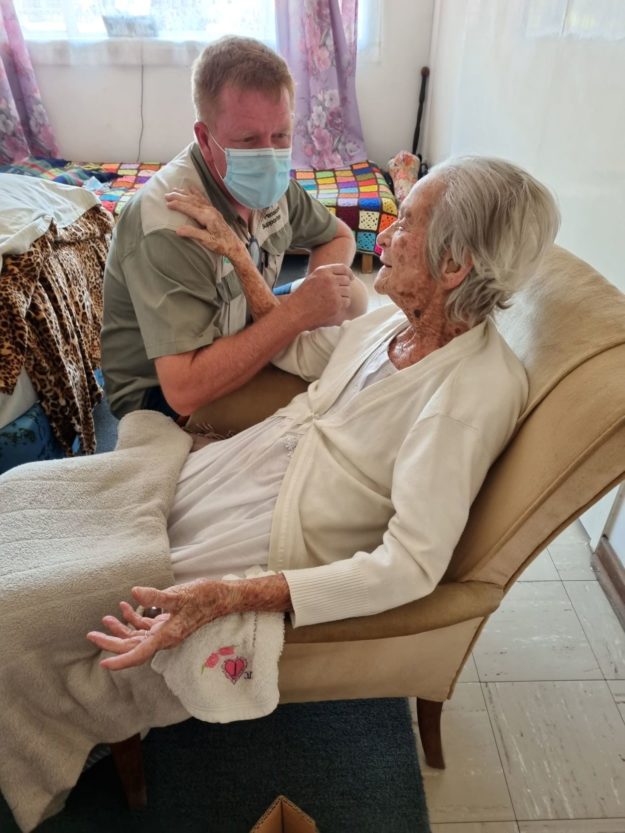 Dear Friends and Supporters of the Zimbabwe Pensioner Support Fund, We have been supporting pensioners in Zimbabwe for the past 19 years and are hoping you could possibly do a story about us and how this all came about. Helping us to continue helping the pensioners in Zimbabwe, especially now with their current crises. Just… 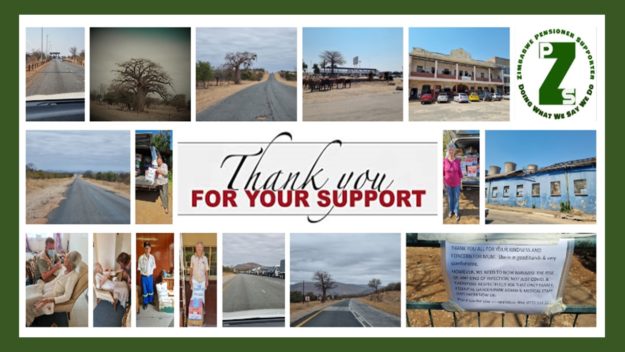 by Johan and Linda Schultz We always say hope for the best, but prepare for the worst… some things cannot be prepared for, you have to wing it, this was one of THOSE. Our previous 3 weeks were beyond hectic, we finally received our new updated Ease of Movement letter from the Zimbabwe Department of…